The Frightened Frog—An Environmen­tal Tale, a National Garden Clubs, Inc. publication, plays a pivotal role educating our youth. The following is a quote from the book: “Try not to touch us and move us around. It can kill us with diseases that quickly abound. Many of us are an endan­gered species that’s for sure. Something must be done to help us endure.” What a powerful way to pass down wonderful information to our next generation!

The Endangered Species Act (ESA) provides a program for the conservation of threatened and endangered plants, animals, and the habitats in which they are found. The lead federal agencies for implementing ESA are the U.S. Fish and Wildlife Service (FWS) and the U.S. National Oceanic and Atmosphere Administration (NOAA) Fisher­ies Service. The FWS maintains a world­wide list of endangered species. Species include birds, insects, fish, reptiles, mam­mals, crustaceans, flowers, grasses, and trees. Additional information can be found at: http://www2.epa.gov/laws-regulations/ The official text of the ESA is available in the United States Code on FDsys, from the U.S. Government Printing Office.

One of the responsibilities serving NGC as chairman of Endangered Species is to serve as Ad­visory Board Member for Endangered Species Co­alition (ESC) with David Robinson, Endangered Species Day Director. One of the many educational projects of ESD encourages teachers and students to participate in the 2016 Endan­gered Species Day Youth Art Contest. This contest provides students with an oppor­tunity to learn about endangered species and express their knowledge and support through artwork. The students are strongly encouraged to incorporate a positive per­spective in their artwork. For example, their illustrations can portray a species story: an imperiled species that has recovered thanks to the protection provided by the Endan­gered Species Act. The ESC is a celebra­tion of America’s success and leadership in protecting threatened and endangered spe­cies. All of the basic information you need to participate in the contest can be found at website: @email

What happened to the peregrines (Falco peregrinus)? The peregrine falcon is one of the world’s most spectacular feathered birds. John James Audubon observed peregrines nesting along the river bluffs, in Missouri. Until the late 1800s, peregrines were spotted by early explorers on the bluffs. Otto Wid­man, author of A Preliminary Catalog of the Birds of Missouri, had personal knowledge of nesting pairs at the mouth of the Meramec River and below Cliff Cave Country Park, on the mighty Mississippi. By the turn of the 20th century, peregrines had vanished from the bluffs. These birds and others species were victims of habitat destruction, shooting, and egg collecting. 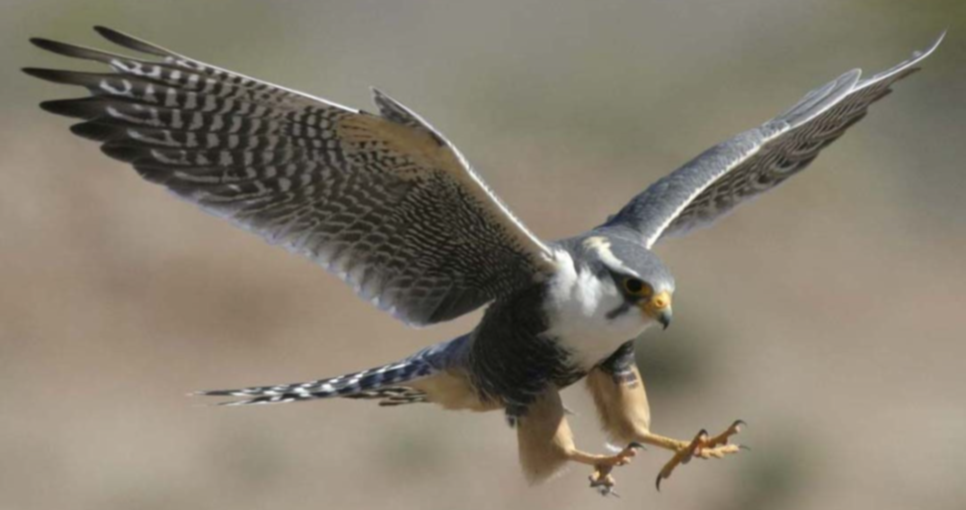 The most isolated populations of per­egrines in the United States continued to thrive until farmers began using the pesticide dichlorodiphenyltrichloroethane, com­monly known as DDT. This pesticide was used to control insects in agriculture in the 1940s. By 1964, not one single breeding pair of falcons could be located east of the Mississippi river. By 1970, the U.S. Fish and Wildlife Service had listed the American per­egrine falcon as endangered. Fortunately for peregrines and other birds of prey, DDT was banned in 1972. At that time, however, there weren’t enough wild birds remaining to rebuild the population naturally.

The rebuilding all began at 7:00 a.m. on June 27, 1985, on the 11th Floor of Pet Incorporated, in downtown St. Louis, Mis­souri. That morning, Walter Crawford and staff member Tony Chiles opened the door of the hack box, built on the corner of the building’s northeast balcony. Inside the box, two young male peregrine falcons moved toward the open door. [For information on hack boxes and hacking, please see: https://en.wikipedia.org/wiki/Hack_(falconry).]After the two staff members opened the hack box door, they quietly left the balcony so they would not disturb the chicks. The remainder of that day and for the next three weeks, Jeff Meshach and Cheryl Tatom, two World Bird Sanctuary (WBS) interns, took positions on other buildings, where they closely watched the activities of the two falcons.

The release of these two young males was the beginning of World Bird Sanctuary program to reintroduce the peregrine falcon to Missouri as a nesting series.

Success finally came after six years of hacking peregrines. At approximately 4:00 p.m. on Friday, May 3, 1991, an employee from Southwestern Bell informed WBS that one of the eggs from a wild pair hatched in the nest box on the 36th floor of One Bell Center. This was the first wild peregrine fal­con hatched in Missouri in over 100 years.

The return of the peregrine falcon to Mis­souri after an absence of over 100 years wasn’t an easy task. It took years and was the result of planning and a lot of hard work by WBS staff, volunteers, and interns.

The peregrine falcon would have probably become extinct in the United States had it not been for the work of the Peregrine Fund, and other non-profits, such as the World Bird Sanctuary, by captivity-producing young peregrines and releasing them into the wild through hacking.

The above information appeared in an issue of Mews News, newsletter of the World Bird Sanctuary, Summer 2015, Vol. 37, No. 2.

Be a part to educate and save our en­dangered species all over the world.

Article and photo reprinted with permission by The National Gardener.

Editor's Note:  The contest has closed.