On the night of June 5, 1944, U.S. warplanes dropped hundreds of paratroopers into the quiet, quaint Norman village of Sainte-Mère-Eglise and surrounding areas in France, to provide ground support and secure area bridges and roads as part of “Operation Overlord,” the sweeping American and Allied plan to liberate France and all of Europe from German occupation in World War II.

Early the next morning on June 6 – known forever as D-Day – more than 160,000 U.S. and Allied troops participated in amphibious landings along a 50-mile stretch of heavily fortified French coastline of Normandy, France. Five beachheads (designated in the plan as Omaha, Utah, Gold, Juno and Sword), were the designated landings for the largest seaborne invasion in history. The cost in lives on D-Day was high, with casualties suffered by U.S. and Allied armed forces estimated to be over 10,000. The ultimate sacrifice of these soldiers resulted in a critical turning point of the war, allowing more than 100,000 American and Allied troops to gain a strategic foothold in Europe and ultimately end the conflict against Germany in Europe in May 1945.

Sainte-Mère-Eglise widely is considered the first town in France liberated from German occupation during the historic D-Day invasion.

The ‘Mother of Normandy’

On the 75th anniversary marking D-Day this year, members of the Jefferson Parish Council of Garden Clubs and I were honored to place a National Garden Clubs’ Gold Star By-Way Memorial Marker and a memorial plaque in the town honoring Mme. Simone Renaud, known as the “Mother of Normandy,” in recognition of her acts of kindness to Americans and their families during and after the war. Renaud was the wife of Alexandre Renaud, the town’s mayor, pharmacist and postmaster at that time. They were witnesses to the first hours of France’s liberation during D-Day. American soldiers, who fought and lost their lives in battle during the first hours and days of the invasion, were solemnly interred in the town’s cemetery. 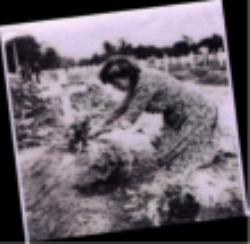 Mme. Simone Renaud tended to the gravesites of American soldiers who lost their lives in battle at or near Sainte-Mère-Eglise during the first hours and days of D-Day. In addition, she answered each letter from American families who wrote to inquire about the final resting places of their soldiers. The massive Allied effort on D-Day was a pivotal turning point in World War II in the liberation of France and Europe from German occupation. 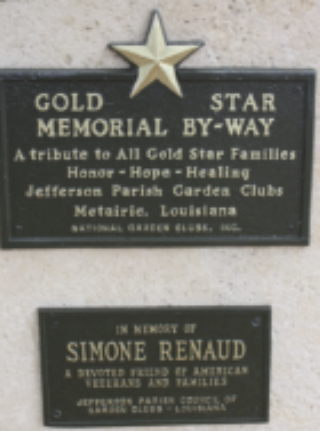 The NGC Gold Star Memorial By-Way Marker and plaque honoring Mme. Renaud, “The Mother of Normandy,” were presented to her son, Maurice Renaud, Mayor Jean Quetier and town of Sainte- Mère-Eglise at a ceremony marking the 75th anniversary of D-Day. Dignitaries from the United States, France and internationally attended the ceremony. A highlight of the day’s events included a fly-over by vintage American C-47 troop and cargo transports (which played a pivotal role in the Normandy invasion on D-Day), a reenactment by paratroopers and a children’s historical play. 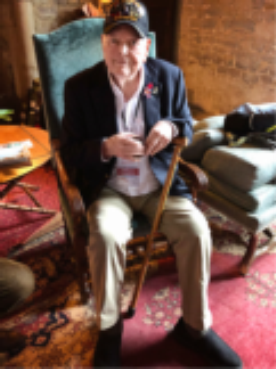 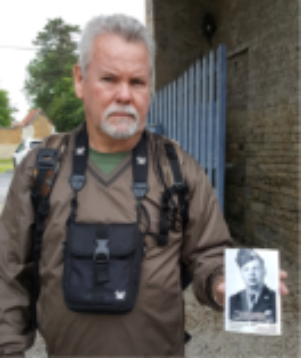 Above:  Galbraith’s son holds a military service photo of his father. Below:  William Galbraith, a paratrooper with the U.S. 101st Airborne Division in World War II, attended the observance of the 75th anniversary of D-Day in Sainte- Mère-Eglise. 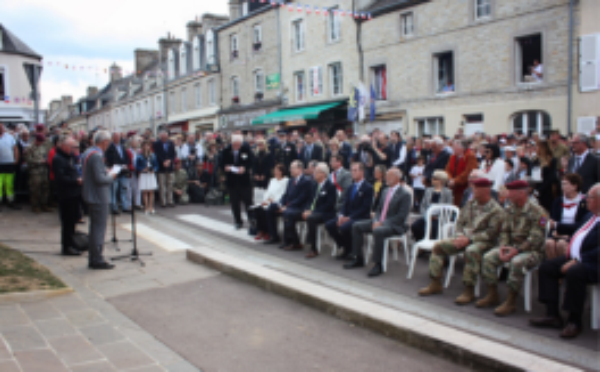 The town of Sainte-Mère-Eglise, and its significance on D-Day in World War II, was featured in the 1962 Academy Award-winning film “The Longest Day,” an account of events leading up to, during and following that historic day based upon the 1959 novel by Cornelius Ryan. In a real incident and famous scene in the movie, Pvt. John M. Steele, (1912-1969), an American paratrooper with the 82nd Airborne Division, Company F, 505th Parachute Infantry Regiment, landed on the church roof and his parachute became entangled on the steeple. Steele hung there for hours, feigning death, while being a witness to the fighting below. He eventually was released from the parachute by two German soldiers positioned in the bell tower and taken prisoner, only to escape a few days later to rejoin his division. Wounded in the foot during his parachute descent, Steele was awarded the Bronze Star for valor and the Purple Heart for being wounded in combat. Each year on June 6, the people of Sainte-Mère-Eglise commemorate their freedom. Events include a staging of Steele’s parachute on the church steeple, with an effigy dressed in his Airborne uniform. Steele continued to visit the town throughout his life, and became an honorary citizen. The Auberge John Steele, a local tavern, maintains his memory with framed photos, letters and newspaper articles and the town’s museum offers an extensive collection of D-Day memorabilia. The church garden in Sainte-Mère-Eglise. 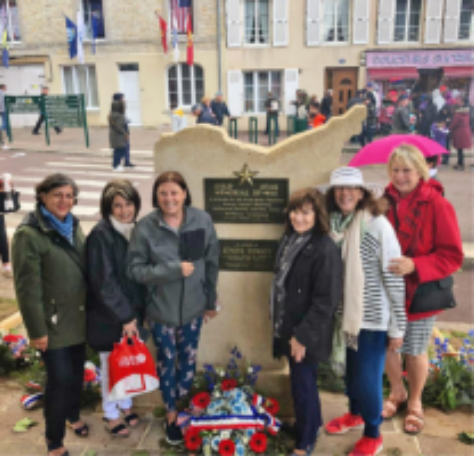 Above and below are pictures of the town of Sainte-Mere-Eglise.

When letters arrived from American families inquiring about the final resting places of their loved ones, the Renauds took on the responsibility of corresponding to each and every letter. In the months and years to follow, Mme. Renaud singlehandedly took on this task. In addition to writing personal condolences to each family, she often included a photo of the gravesite, a sample of French soil and petals from the flowers she regularly planted at the cemetery. Her lifelong dedication to American families – whose lives were forever changed by the course of history – is unparalleled. The idea for the dedication of a marker and memorial plaque in Sainte-MèreEglise stemmed from an inspiring 2018 presentation and exhibit on Mme. Renaud at the National WWII Museum in New Orleans, Louisiana.

Article and photos reprinted with permission by
The National Gardener, Fall 2019.