Sometimes, you simply need to work with a plant for a number of years before you suddenly “discover” its beauty and come to appreciate that plant.  This plant may not provide an incredible show throughout the entire season, but it contributes to the garden in ways that even members of its own family cannot attest.  For the past 17 years I have used Aster oblongifolius ‘October Skies’, commonly known as aromatic aster, in various designs and seen it at various public gardens. It struck me as a good plant, but it was not until the past few years when I came to the dumbfounded realization that this was a great plant and in need of far wider distribution and recognition!

Perhaps one of the challenges this plant has faced in the need for better recognition among gardeners is its name, since the genus name changed from Aster to Symphyotrichum.  I always wonder why plant names cannot become easier to spell, no less pronounce, when they undergo a change!  Fortunately, the plant was not banished from its family and subject to a total identity crisis since it remains a member of the Asteraceae or aster family.  This is a huge family with over 32,000 species and 1,900 genera.  The genus name of Aster was first penned by the Swedish botanist Carl Linnaeus (1707-1778) in 1753.  It is derived from the Greek Astḗr for sun, describing how the flowers resemble a glowing star!  The species epithet describes the oblong shape of the foliage and was crafted by the English botanist and zoologist Thomas Nuttall (1786-1859) in 1818.  Nuttall lived in the United States from 1808-1811, only to return after the War of 1812 in 1815 and remained in residency until 1841.  He conducted numerous botanizing excursions, during which he encountered and named this species.  The name Symphyotrichum was first authored in 1832 by the German botanist, physician, and zoologist Christen Gottfried Daniel Ness von Esenbeck (1776-1858).  He crafted it from the Greek Sỳmphsis, meaning coming together or coalescing and Trich for hair.  At the time, he was studying a specimen of New York aster, now known as Symphyotrichum novi-belgii.

To better understand the root of this name, it is important to understand the anatomy of “flowers” in the Asteraceae.  What appears as one flower with a ring of petals is actually 50 or more small individual flowers perched atop a floral platform called a capitulum!  The individual flowers atop the capitulum typically consist of an outer ring of ray florets and an inner boss of disc florets.  All the petals of an individual flower are collectively called a corolla and for the disc florets, the corolla is greatly reduced in size and fused to create a small tube.  The tube-like corolla of the disc florets provides a very bristly feeling to the touch.  For the ray florets, the corolla produces a tongue-like extension that projects outward and looks like a conventional petal of a flower.  At the base of the corolla of nearly all flowering plants are leafy bracts called a calyx that initially provides a protective cover for the flower bud.  In the Asteraceae, the calyx is reduced to small hairs called a pappus that during the process of seed development mature into a parachute-like structure.  This structure carries the seed via wind to a new “home.”  This is clearly displayed in dandelions as the seeds float about the landscape under white parachutes!  It was the tiny coalescing hairs of this pappus – initially visible only via a magnifying glass beneath a floret – that Esenbeck was studying when he crafted this new genus name.  However, the story is not over!  In 1995, the American writer and botanist Guy L. Nesum (1945-) noted the difference in DNA structure throughout the Asteraceae and proposed splitting the family into 6 genera, resurrecting the name authored by Esenbeck over 100 years prior for one of the groups!

Fortunately, the plant is far easier to grow than to understand the complex history of its name!  Native throughout Eastern and Central North America, it is not common in the wild, a point that undoubtedly contributes to its lack of recognition.  The plants are low growing, reaching 1-3’ in height and are strongly branched, creating a very dense plant.  Its habit provides an advantage over many of the taller asters since it does not require staking or pinching.  The foliage is alternately arranged along the stems and connects directly to the stem rather than via the typical petiole or “leaf stem.”  The foliage is largest near the base of the plant, reaching 1½” long by ½” wide and diminishes to near ½” long at the tips of the stems.  The foliage smells similar to balsam when crushed, providing the common name of fragrant aster.  The plants are also not a favorite of browsing deer, which may be a consequence of the aromatic foliage.  Many of the basal leaves drop as the season progresses, but due to the densely branched nature of the plant, their absence is not missed.  Plants grow well in sunny locations, as well as open woodlands or in the light shade of small trees.  It adapts well to rocky or sandy soils, as well as moister soils with a higher silt and clay content.

Flowers begin to appear in September on seedling-grown plants with some plants still displaying flowers well into November.  The flower heads are 1-1¼” in diameter, with 20-35 petal-like ray flowers varying from light to dark blue or purplish blue in color.  The central disc florets are initially yellow, contrasting nicely with the ray florets and age to a darker reddish purple, as seen in Image 1 of ‘October Skies’.  Ultimately, they develop into fuzzy “seed heads” as the pappus expands and provides the parachute to carry the seed to new locations on windy days.

If you are looking for a uniform bloom time and height, there are two excellent cultivars on the market.  ‘October Skies’ is the selection I first started to use 17 years ago and is responsible for my initial fascination with this plant (as seen in Image 2 at Longwood Gardens).  It is a compact selection, growing to 18-24” tall, and was introduced by the Primrose Path plant breeders of Scottdale, PA, in 1999.  Evidently, the month of October offers deeper blue skies than other months in North America and the plant’s name honors its deep, sky blue “flowers” throughout the month of October.  Its dense mounding habit makes it ideal for use as a weed smothering groundcover.  In fact, it is so low maintenance that I never took much notice of the plant until it started to flower.  Seventeen years ago, I planted it beneath a Seven Son Flower (Heptacodium miconioides) that was limbed-up into a small tree.  The Heptacodium affords some light shade that does not deter the vigor of the aster in the least as it has kept weeds at bay while blooming beautifully every year since!

The other great selection, which I have only recently “discovered” is ‘Raydon’s Favorite’.  Mr. Raydon Alexander was a horticulturist in San Antonio, TX, who took interest in an unnamed aster that had been passed about between local gardeners for over 50 years.  It had a prolific number of deep bluish-purple flowers just larger than one inch and a compact height of 18-24”.  He determined it was a form of fragrant aster and in 1989 proceeded to grow as many selections of this species as possible.  He went so far as to collect seed from Wisconsin to Tennessee in an effort to determine the plants origin.  Based upon regional comparisons, he concluded its parentage to be a very attractive selection from Eastern Tennessee named Aster oblongifolius var. angustatus, although this varietal status is no longer recognized as valid.  This selection is noted for very fine foliage, although it typically grew to a taller height of 2-3’ with smaller flowers of around ½”.  It has been speculated that this selection may have crossed with the larger flowered Aster grandiflorum where natural populations overlap, as similar appearing strains are evident in Southeastern Tennessee near Look Out Mountain.  Having determined its heritage as best as possible, Mr. Alexander sent a letter and a division to Allen Bush in 1991, who at the time ran a mail order nursery named Holbrock Farms.  He described his efforts of identifying the plant in the letter, which he designated as his “favorite” in his trails and said Allen could do with it as he wished.  One year later in 1992, Holbrock Farms listed it in their catalogue as Raydon’s favorite selection and it has grown in popularity ever since!  Most notable is how well the plant grows in extremes of soil types and weather conditions, making it an ideal plant for a variety of regions throughout North America.  To my fascination, the plant also blooms very late, starting in mid-October and continuing well into November in central New Jersey.  Image 3 was photographed early in the morning of November 9th and although the flowers are covered in a heavy frost, they continued to bloom unabated throughout the week to come!  Image 4 highlights the abundance and size of the ray florets in late October, along with a visiting honeybee!  An ideal plant for late season interest in the garden as well as a great benefit for the pollinators.  For the gardeners who only wish to have the true ‘Raydon’s Favorite’ in the garden, it should be noted that the plant does produce seedlings that can bloom earlier in the season with a taller habit.  For those purists, the seedlings should be rogued out.

Fragrant aster is a wonderful plant to mass in the garden as a groundcover, to plant among ornamental grasses or use as pops of mid to late autumn color in the garden. During the years I have worked with the plant, it has not required division or care other than removing the previous year’s stems each spring.  In spite of these great, garden worthy attributes, it is not a plant I see gracing many landscapes.  Its absence in most gardens brings to mind the opening line of Raydon Alexander’s note to Allen Bush: “I am taking the liberty of sending you an aster that should, I think, be more widely distributed.”  I cannot agree more!

National Garden Clubs, Inc. is a 501(c)(3) organization that aims to promote the love of gardening, floral design, and civic and environmental responsibility. There is a local club near you, click here to find one and join. Subscribe to the NGC’s blog by entering your e-mail here. You will receive an e-mail when there is a new blog article on the NGC website. You do not have to be an NGC member to subscribe.

Informative article! I had been struggling with NY Aster here in Western NC. I will try October and Raymond
Thank you

In inland Maine, Raydon's is not reliable although it has been gorgeous this year. Aster Symphyotrichum laevis Bluebird is my favorite, beautiful and reliable. October Skies doesn't put on much of a show for me, either. Coastal Maine Botanic Gardens has a lot of Wood's Blue. I am going to try it next year, but they are a zone warmer than I am. I love the colors in my 4 different New England asters but they would perform better with more moisture. The "legs" look pretty bad by the time they bloom. Bluebird, on the other hand, retains lovely foliage the entire season.

Thank you for commenting on how asters do for you in a much colder zone. We would love to have you write about your gardening experiences in Maine for a future blog article. 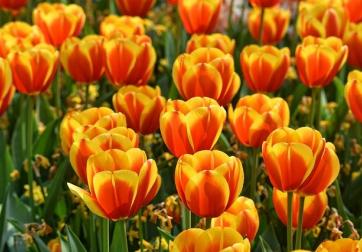 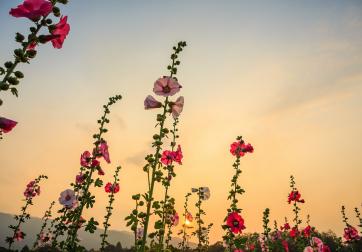 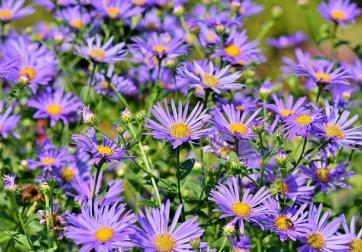